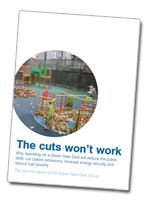 The cuts won’t work, the Green New Deal Group’s second report shows how, contrary to the policy of all the major political parties, cutting public spending now will tip the nation into a deeper recession by increasing unemployment, reducing the tax received and limiting government funding available to kick-start the Green New Deal.
Instead a bold new programme of ‘green quantitative easing,’ rather than simply propping up failing banks, could help reduce the public debt and kick-start the transformation of the UK’s energy supply while creating thousands of new green-collar jobs.
Drawing on evidence from the great depression in the UK and the USA, the Group show how cuts in public spending then, before the economy had recovered, tipped both nations deeper into depression.
Now, the Group say, the Chancellor must announce a plan that updates the lessons from history for the challenges of the modern world, and spend to reduce the public debt by investing in the long-term restructuring of the UK’s energy infrastructure needed to meet the challenges of climate change and the inevitable peak and decline of oil.
To illustrate the potential of ‘green quantitative easing’, new calculations produced by nef (the new economics foundation) for the Group reveal that:
A sample of £10 billion in green quantitative easing invested in the energy efficiency sector could:

A sample of £10 billion in ‘green quantitative easing’ invested in onshore wind could:

Or, a sample investment of £10 billion could:

Once spending on the green economy of the future has breathed life back into the deflated economy, the Green New Deal will require a whole new savings and investment infrastructure to meet the long-term investment needed to underpin the Green New Deal and to meet the needs of a new generation of investors who are fed up with all that has gone before.
This means secure new forms of saving which promise stable returns over the longer-term. The Group put forward a range of new measures to help public borrowing and encourage public investment by individuals, local authorities and companies in greening and reviving the economy. The foundations for these must be laid now. These include:
Measures on tax that are explicitly designed to re-gear the UK economy and transform energy infrastructure:

New savings mechanisms that support the greening of the economy now, create thousands of new jobs and guarantee stable returns into the future:

The Green New Deal group believe that despite the appearance of calm, the need for the implementation of the Green New Deal is greater than ever. When the Group launched their first report, new analysis suggested that from 1 August 2008 there were only 100 months, or less, to stabilise concentrations of greenhouse gases in the atmosphere before we hit a potential point of no return. The climate clock is still ticking and nothing like the scale of reform needed to rapidly re-engineer the economy has been implemented, anywhere.
This could be a real opportunity for the UK to show global leadership by implementing an interlinked package that recognises the need for targeted public spending in a downturn.  Not to further fuel an economy hard-wired into ever increasing use of fossil fuels, but to revitalise the productive economy and lay the foundations of the low-carbon infrastructure of the future.
The opportunity for action is even more pressing than it was when President Franklin Roosevelt instigated his bold New Deal programme that touched almost every aspect of economy and society. The timescale is limited by the urgent need to stabilise concentrations of greenhouse gases in the atmosphere before the risk of uncontrollable global warming increases significantly. Today, there is a plan on the table that could revitalise our damaged economy while also radically restructuring it for a low carbon future. Now the vision is needed to implement it before it is too late.
For more information, or to arrange an interview with a member of the Green New Deal Group, please contact Ruth Potts, co-ordinator, the Green New Deal Group, on:
t: 020 7820 6357    m: 07749 026 203    email: ruth.potts@neweconomics.org
Download the report (PDF1,353KB)