The Green New Deal Group launched a new report today on the need for Green Infrastructure Quantitative Easing and the collection of money owed by tax cheats as the way forward for Europe, not a form of QE that is already causing economic nightmares and damage in the impact it has already had on Switzerland.  In a press release the Group said: 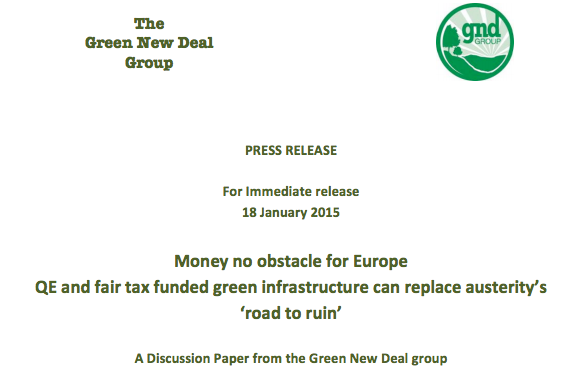 Next week will be a momentous one for Europe. On January 22nd the European Central Bank (ECB) is expected to start the e-printing presses rolling with a massive Quantitative Easing (QE) programme to attempt to tackle stagnation and deflation in the Eurozone. Then on January 25th Greece goes to the polls and if, as expected, the left wing Syriza party gets the majority of votes, a fundamental challenge to the disastrous Europe-wide austerity programme will follow.
The Green New Deal group’s paper ‘Europe’s Choice – How Green QE and Fairer Taxes Can Replace Austerity’ asserts that an ECB QE programme to buy government bonds will, like it’s £375 billion UK predecessor, do little to increase economic activity, and will merely boost asset prices rather than generate sustainable jobs throughout the continent. Instead the Green New Deal Group proposes that all EU countries introduce a programme of ‘Green Infrastructure QE’ to increase the continent’s renewable energy supplies, ensure all buildings are energy efficient and revitalise local and regional transport links. Paying a living wage would help to boost the tax take and overcome the present lack of long-term effective demand in the economy. The paper estimates that a continent wide programme would need funding of the order of 500 billion Euros (£400 billion) per year over the next decade.
The Role of Fairer Taxes
Tax expert and Green New Deal member Richard Murphy said “My research has estimated that tax evasion (illegal non-payment or under-payment of taxes) in the European Union is approximately €860 billion a year. Tax avoidance (seeking to minimise a tax bill without deliberate deception), might be of the order of €150 billion a year. Such non payment of taxes might cost the governments of the European Union €1 trillion a year. Collection not cuts is what is required.” He added “In Greece and the UK, where anti austerity parties are on the rise and elections are imminent, these losses might amount to €19 billion for Greece and for the UK the tax gap may be as large as £120 billion a year.”
Green New Deal group member Caroline Lucas MP said: “Next week the UK and the rest of Europe stand at a cross road. They can go down the usual QE path that benefits the banks and the asset rich, or they can ensure a greener future funded by a massive ‘Green Infrastructure QE’ programme and the effective collection of at present unpaid taxes. In doing this it could also steer Europe away from continuing down the discredited ‘austerity road to ruin’.”
http://www.taxresearch.org.uk/Documents/EUSocialists.pdf
ibid
http://www.taxresearch.org.uk/Blog/2014/09/22/new-report-the-tax-gap-is-119-4-billion-and-rising/
The full report can be read here.